Calling my best friend up a few months ago, I had an interesting exchange. I excitedly told her “I’m going to be publishing my writing for the Flow Arts Institute!”
Her response was not what I expected.

“I thought you hated the term Flow Arts”.

Oh right, I thought. “I did, I guess.” realizing a change occurred in my internal thoughts over the years, “but I have changed my mind.”

There is this point of view in the juggling world, that Flow Artists are lower on the hierarchy than jugglers, and that somehow the prop you use determines some of your worth as a performer. Or even worse, that Flow Artists are just a bunch of hippies smoking weed, om’ing at each other, appropriating juggling culture and calling it something new. EJC goes to the Netherlands next year, and there we will see that there are as many hippie jugglers as there are hippie flow artists, so that’s not what differs between the two groups.

To say post modern juggling and contemporary circus have been reinventing themselves is redundant and obvious. New props, new ideas and new ways to move have all been integral to this new wave of creativity in the scene. Isn’t that what’s exciting about juggling today? We CAN create something new!

At some point 10 years ago there was a collective need, from what those who are now called Flow Artists, to be defined differently and to identify differently than the jugglers. There are a few reasons for this.

The big named festivals in the juggling world don’t celebrate the flow arts. For example: there was no hooping, poi, staff or other spinny “Flow Artist Props” in the EJC Gala this year. And the Flow Arts aren’t generally featured in many juggling festival Gala’s. When people ARE Featured in Gala’s, like Nick Woolsley in EJC 2006 or Gail O’Brian in EJC 2014 , it’s a big deal: it’s a breakthrough for these props and styles. The traditional juggling festival gala event celebrates traditional style juggling and circus, which is great! But Flow Artists  also need a place to be celebrated, and they created it. WIN.

Secondly, the juggling community didn’t want to talk about contact juggling, poi, staff or hooping in their online discussion boards for a long time, and would make fun of us when we tried. Flow Artists needed to connect outside of the juggling space to develop beyond into a higher level of skill, connect with others within their prop connections, and to put each other on stages where we could develop our performance abilities. It is why contactjuggling.org was born so long ago, we needed a friendly place to come together.

Yet, the arguments still remain that they shouldn’t be considered as different. So I have decided to write few answers to the arguments about identification with the term Flow Arts. 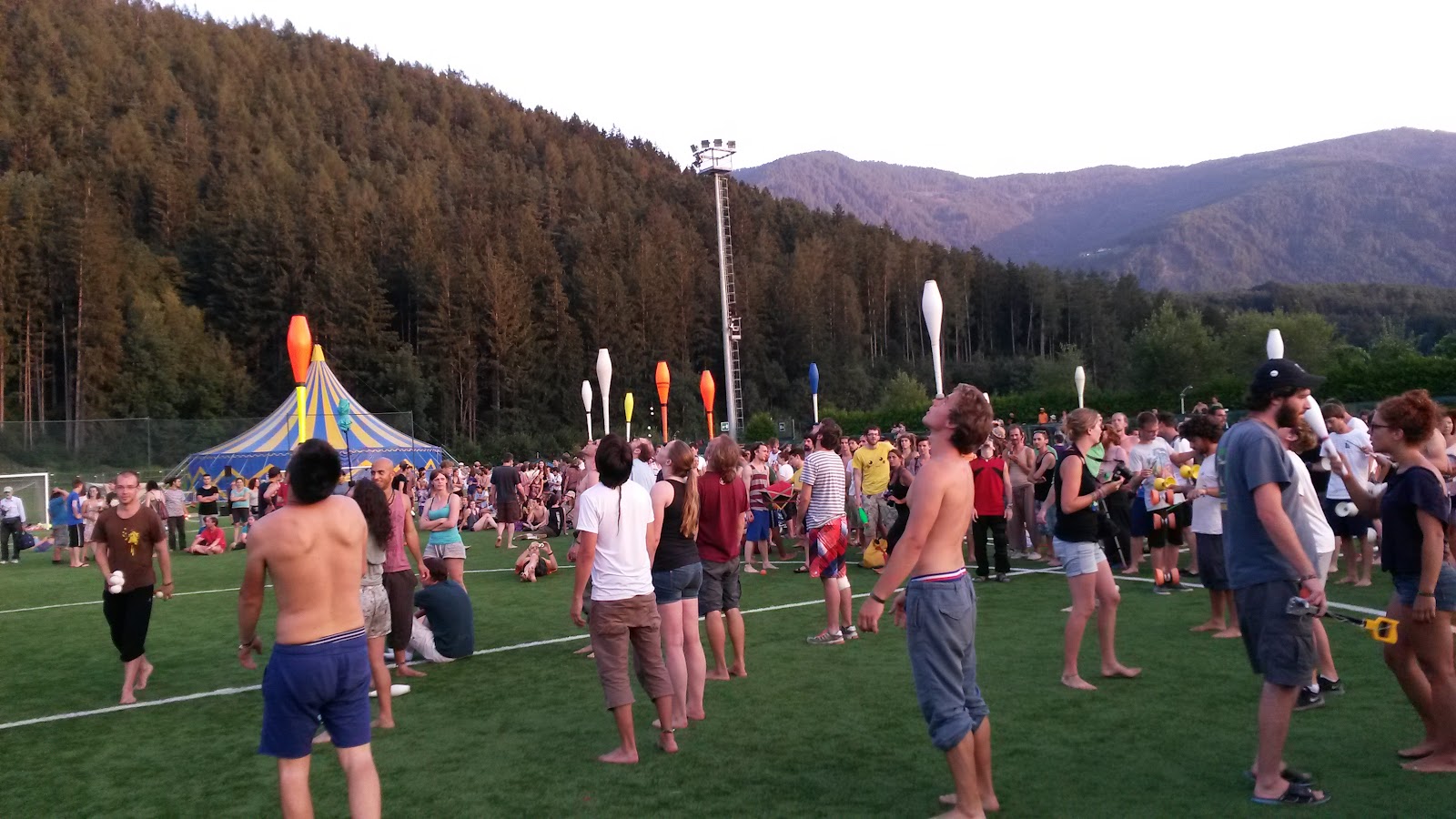 It’s true. If you are only talking about the newly adopted scientific definition of flow, jugglers also feel flow. As does anyone who creates anything with any specific level of skill. However, Flow Artists are speaking of the trifecta of flow, not just the meaning of the Mihály Csíkszentmihályi definition. Flow Arts is the combination of dancing grace, state of mind, and the actual slow-spinning prop movement combined together. Perhaps it should be called Flow Cubed. Do you dance, while in a peak state of mind while your prop spins around your body? We will likely call what you are doing Flow Arts. If you stand in one spot, with all your focus on a site-swap in the air with only your hands moving, but you are in a state of mind they call flow, what you are doing is not likely going to be called Flow Arts. People are still defining the meaning of the word, as it means different things to different people, but from my perspective, Flow Arts combines the three aspects: movement of the body, movement of the prop and the state of mind combined together. If you see a Flow Artists next to a traditional juggler, you will see the differences between the training philosophies.

“Flow is a scientific term that you are misusing” 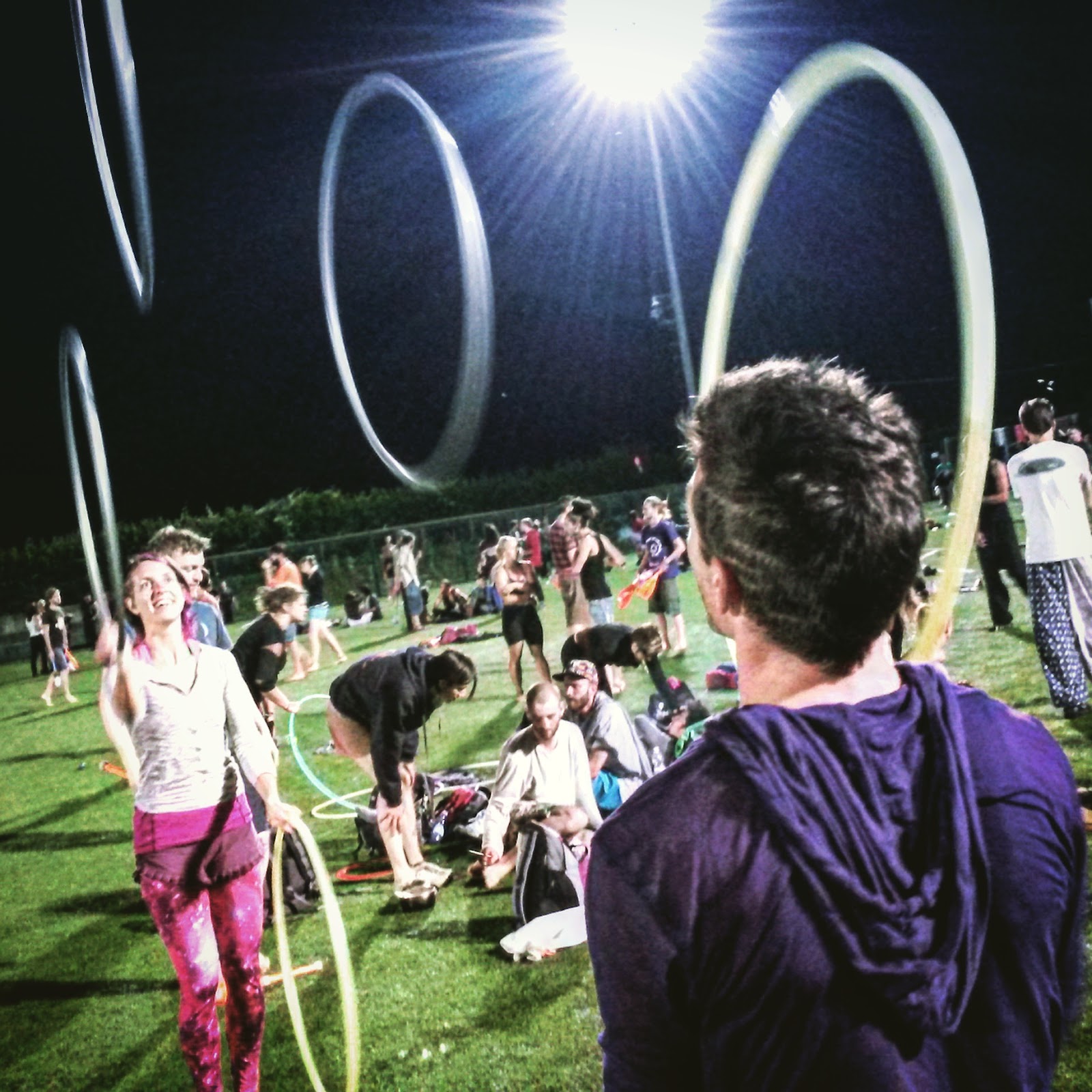 Juggling and Passing hoops – Flow Art, juggling or both?

Let’s be clear, the best  jugglers in the world are still arguing over the definition of juggling.

Yes, there is a lot of crossover, it’s true. Artistic jugglers are more likely to have the full trifecta of flow than a sports juggler (see: fight nights for the most sportive juggling styles). There is a lot of grey area between pure-juggling and pure-flow. Yet, we do need some definitions to have a healthy discussion on the matter.

The real difference between the two is the addition of dance. If you watch anyone juggling more than 5 balls, you will see the tree-planted version of juggling. It’s an official part of the WJF and IJA competition rules, the juggling comes before the performance.  This is the opposite of dance. The focus in sports juggling is on the prop, and not on the body or the character. Dance styles are becoming more and more popular over time, as influences like Stefan Sing and Komai Aoki have disseminated into the European and Japanese juggling communities. Are they Flow Artists? Only if they want to be defined in that way.

Juggling and Flow Arts have more in common than they have in differences, but the differences were large enough that thousands of people felt like they identified with the later. This includes the dancy styles, the subcultures surrounding the two ideals and the differences in choices of props. There is huge amounts of cross over, but the need to distinguish comes from a myriad of nuances that makes each group unique.

Steve Bags used to be a juggler, then turned into a hooping Flow Artist:

“The more my style became based around moving about, the more logical it felt to me to use the term “flow arts” as a description for what I did.” – Steve Bags 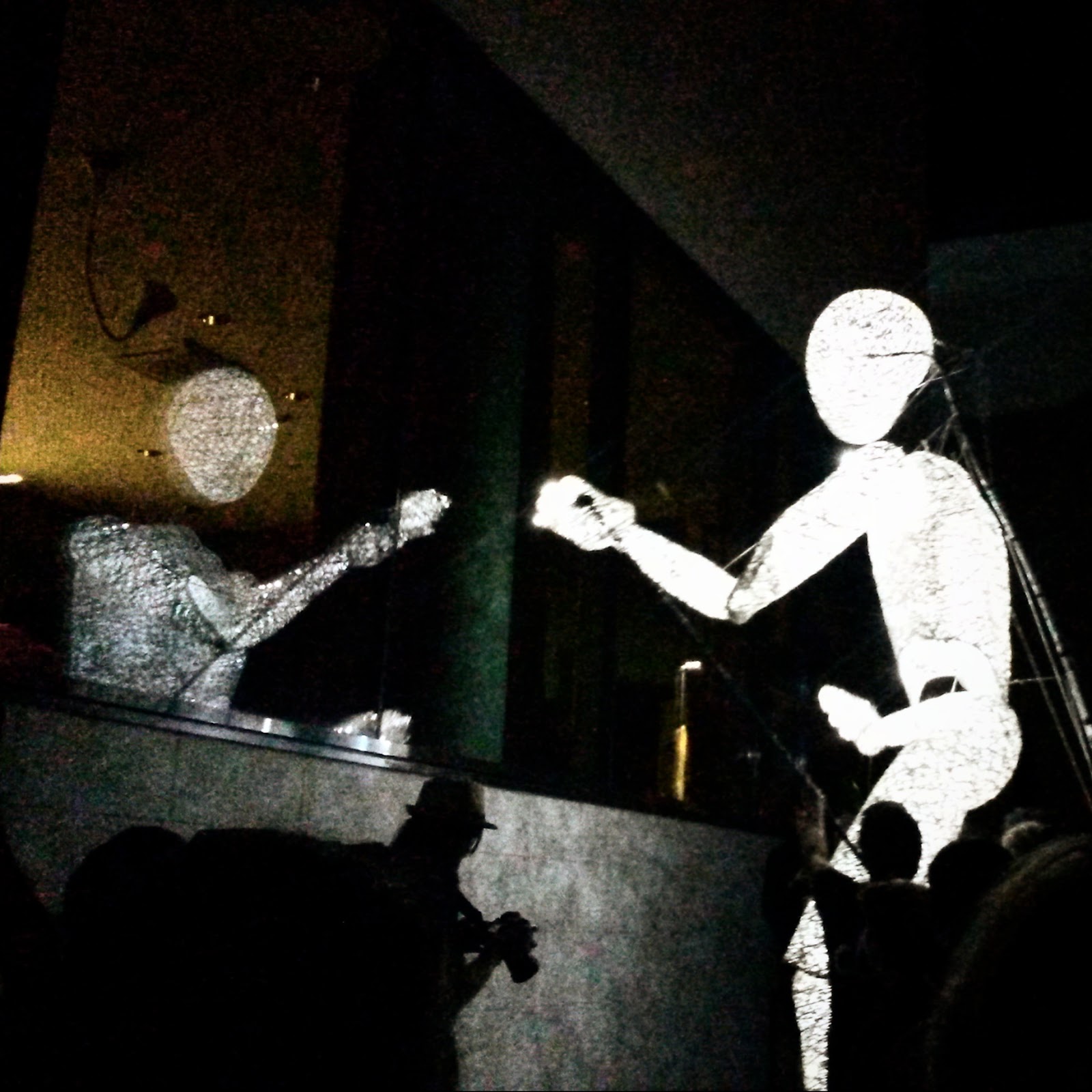 True. Mochen also never danced, and his focus was largely on the prop, not on of the lines of the body. He was an artist, and was aware of his body, and the lines he created and his connection to the prop, which goes farther than many jugglers do. But he was not dancing, he was making the props dance.

The Ministry of Manipulation based its ideology around Moschen’s premise. Yet, object and dynamic manipulation still stands as such a broad category. Thedefinition of puppeteering is also object manipulation and we don’t call it juggling and we consider it completely outside of the juggler’s world. Nevermind the problematic association with the popular lexicon of a “manipulator” is a person who does psychological manipulation.

The term manipulation as a full definition has it’s difficulties just as juggling or Flow Arts does. The only difference is that people who use the term manipulation tend to stand on a higher rung in the hierarchy of the juggling world, distancing themselves from the negative stereotypes of the term Flow Arts.

“I don’t go to the Japanese Juggling Convention because there is a difference between jugglers and Flow Artists in Japan.”

A conversation at EJC with Kohei Kudo 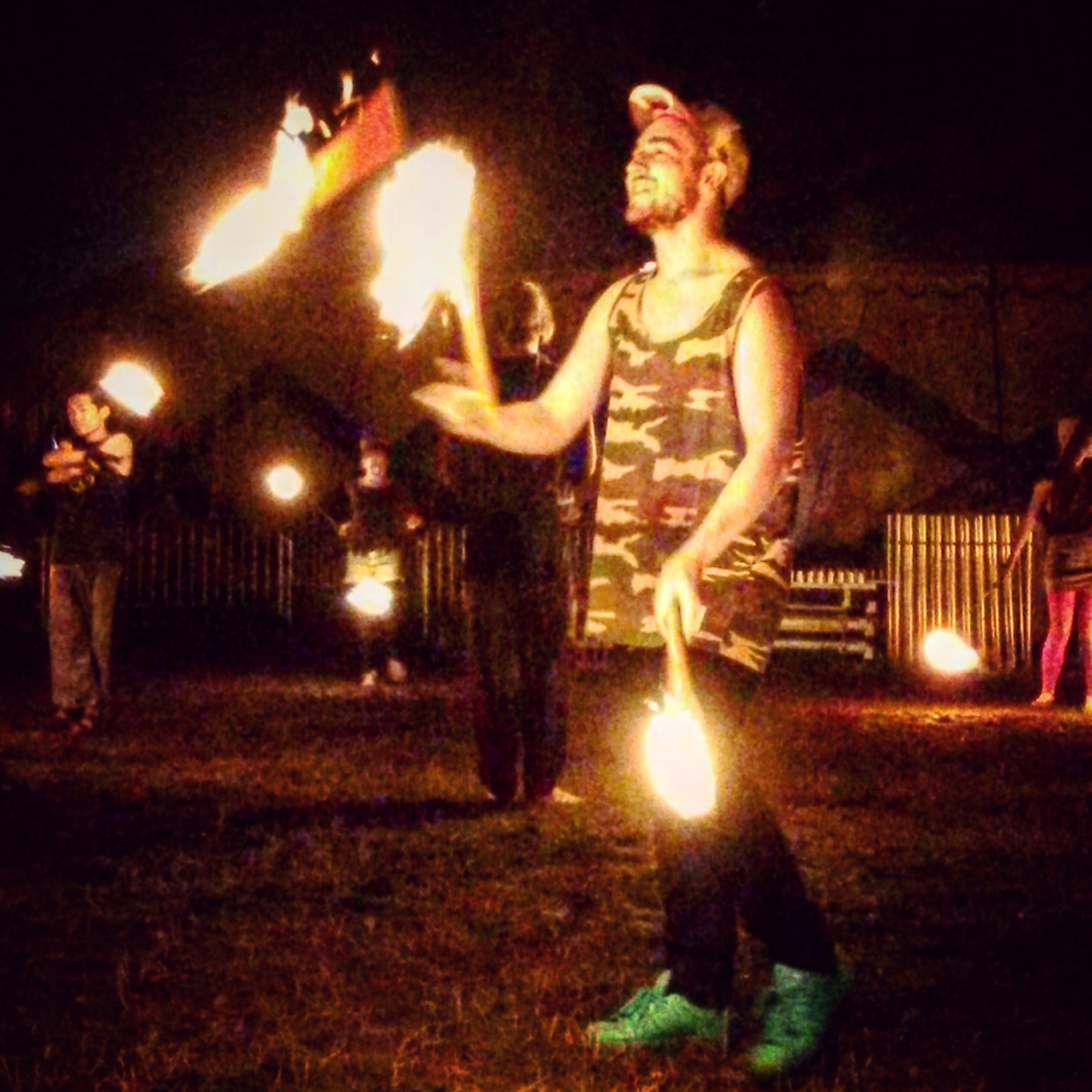 “It’s only in American term, with an American bias. Everywhere else in the world, it’s called juggling”

This World Wide list of flow arts meetups would beg to differ. Yes, it started in the USA, and it is very large in the USA, but there are so many people that related to this term around the world that it has been spreading far and wide. Yuta has been spreading the term in Japan. The Philippine Flow Festival is going strong, and new festivals like SPIN ALL THE THINGS are popping up in various places throughout the world.

Perhaps in the USA the division is larger than you see in the European communities. However, the split is still evident. For example: this past April when Rencontres Des Jonglages was happening at La Maison Du Jonglage, with huge acts like Gandini’s Ephemeral Architectures and Water on Mars (Wes Peden, Patrik Emeret and Tony Pezzo) performing.  Simultaneously, there was the Rendez-v’Hoop convention in Paris at the same time: one which I didn’t even hear was happening until it was over. Not a single juggler at the Rencontres des Jonglages spoke of it, and there was no feeling that the two festivals at the same time conflicted to each other. 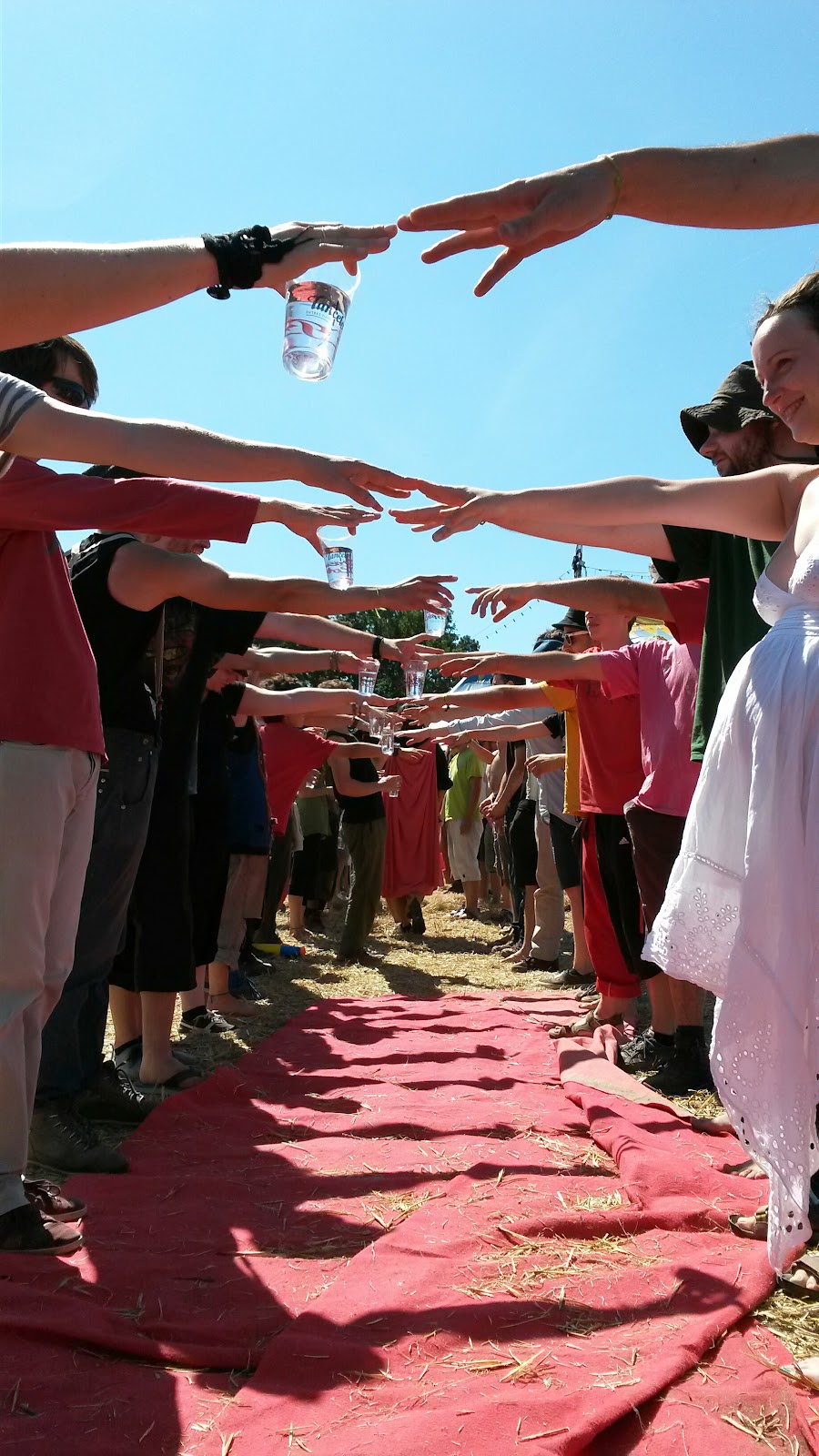 “Using another term is divisive.”

Naming something that is already happening is not what creates division. The differences between these two worlds are not huge, but this prop-hierarchy is real, and we feel it in our experiences. There is a myth that continues which many of the props used in Flow Arts are easier than using traditional juggling props like rings, clubs and balls. In reality it’s just that the props are used differently, and what is fascinating is that the two styles of juggling and flow are merging with this contemporary movement in the juggling world.

At the French National Convention this year, every act within the gala used some type of contact juggling technique – to the point where the unicyclist isolated the tire of the unicycle like an iso hoop, while the seat swung around the wheel. It’s awesome that all the styles are merging, and that the two worlds are having conversations. Yet, there are philosophical differences that do inherently create divisions between each world, and identifying those differences is not what creates those divisions. It is just naming something that is already there. It seems necessary to begin talking to understand each others differences to further engage with each others forms in hopes of creating stronger alliances with both worlds.

Like Steve Bags, I first identified as a juggler, and now I also identify as a Flow Artist. Nobody else gets to define who I am except myself. It is the same for jugglers and Flow Artists. They can be exclusive, or they can be used together.

We are all individuals trying to find belonging in a group. That is why humans identify with labels and terms. The fact is thousands of people, from many places in the world, identify with the term Flow Arts makes the term legitimate in itself. In these articles I attempt to answer why we all have made this choice. It has been common practice in the juggling communities to disparage the term, associate it with negative connotation.  Yet, It is a term that so many people identify with that it’s become a movement of it’s own, forming a massive world-wide circuit outside of the juggler circuit. Like many movements, it has it’s own ideals, and value systems some which are parallel to the juggling and prop-manipulation movements, but they differ in some of the minutia of theory and value. The more conversations we have about the similarities and differences, the better we get to know the details of the philosophies that underpin the two communities.