The term Object Manipulation is the physical movement of non-living objects. The basic idea is fine motor control of a human in relation to inanimate objects. This skill is used in all sportive and artistic activities. Yet, the term is largely used in the juggling community, but to a common bystander it can mean many things. Some examples are: 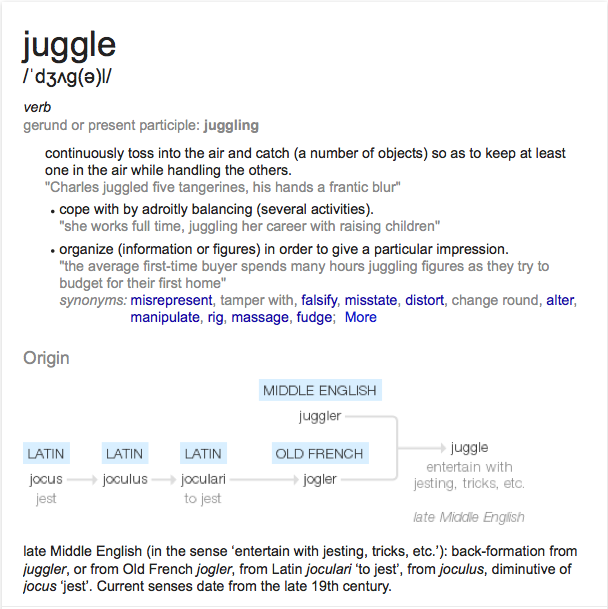 Usually, when people talk about juggling of objects, they are talking about toss juggling. It comes from the old french and middle english words, jogler and juggler, and means to entertain with tricks and clowning. Most often, it includes the throwing and catching of clubs, rings or balls, otherwise known as the Rastelli Standard. Rastelli was the world’s best jugglers, and he set many world records in his lifetime. His tricks revolutionized juggling, and became the current common standard for juggling sticks, plates and balls. Over a period of 20 years from the 60’s to the 80’s, the sticks evolved into clubs and the plates evolved into rings. Much of the juggling world over the last 100 years has stayed true to this standard and explored much of it’s dynamic. Balancing, ball spinning, passing and bouncing is also very common in toss juggling.

Any manipulation that involves full contact of the prop on the person’s body with limited or no tossing technique. Contact techniques are largely based on balancing, rolling and isolation techniques. 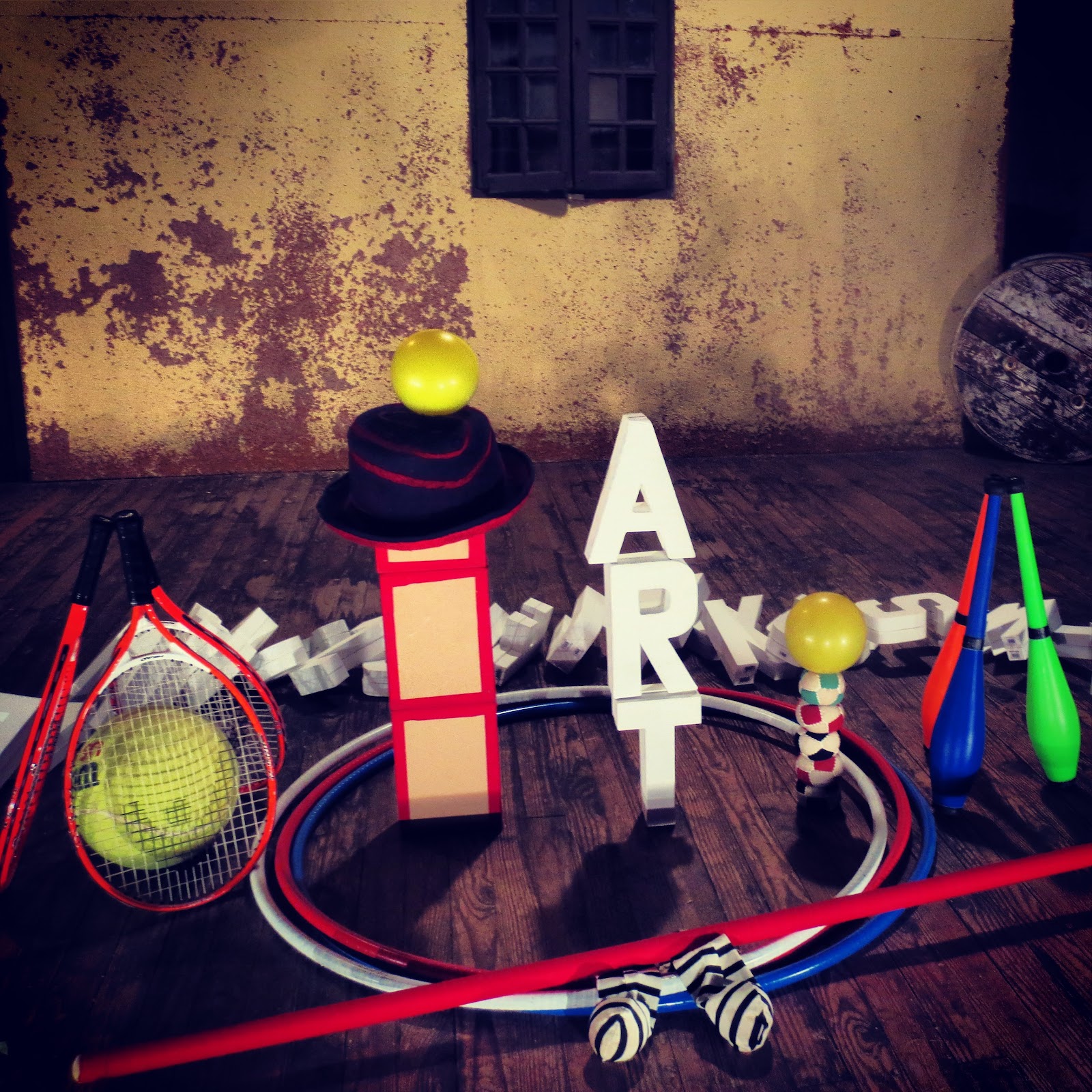 All the props I traveled with, including the entire alphabet

The exploration of new props as well as contact, isolation and asymmetric style in juggling is called New, contemporary or postmodern juggling. Many people have found it necessary to differentiate themselves from the toss standard because it is so well defined by non-jugglers as juggling. Throwing is less common in contemporary juggling therefore new juggling appears different, and therefore people feel the need to communicate that distinction between the two forms. Also known as object manipulation, spinning or Flow Arts.

First, Style: With clubs, rings and balls new styles are created within juggling. i.e. instead of repeating patterns in symmetrical ways, asymmetry has become included. Instead of a fluid, continuous repetition of throws, stops and starts are more common. Contact techniques, spinning without release and isolation techniques are also included more often. As demonstrated by a wonderful talk by Jay Gilligan at TED.

The second part is innovation in props and objects: new props, new combinations of props, new ways to manipulate old props, or increased popularity of out-of-style props are all considered post-modern styles. The increase of new juggling really began in the mid-1990’s, although people like Michael Moschen began thinking of these new innovations as early as the late 70’s.

It refers specifically to circus disciplines such as poi spinning, hula hooping, staff, fans, and many other ground based prop related and movement arts. Many people will also use the term object manipulation or spinning interchangeably with Flow Arts. More specifically, Flow Arts defines itself distinctive from juggling, because of it’s post modern style. Flow Arts is distinctive from the psychological term for flow. SeeDefinitions of Flow.

The community of people dedicated to the Flow Arts. They attend Flow festivals, workshops, and practice their relative discipline often. Many Flow Artists are associated with Burning Man and other music and art festivals. The term largely began on the West Coast of the USA, but has begun to spread around the world. See The History of the Term Flow Arts.

Movement based arts that can include, clowning, aerial arts, acrobatics, dance, object manipulation, tumbling, trampoline, juggling, balancing and more. Large corporate Circus’s usually hire people trained in circus schools. There are many great circus school around the world, and they often focus mostly on movement and body technique, dance theory and acrobatic theory. Many circus schools will only accept people when they are under 25 years of age.

All Prop manipulation that can be performed and that ignites is considered part of the Fire Arts. Often also called fire spinning. 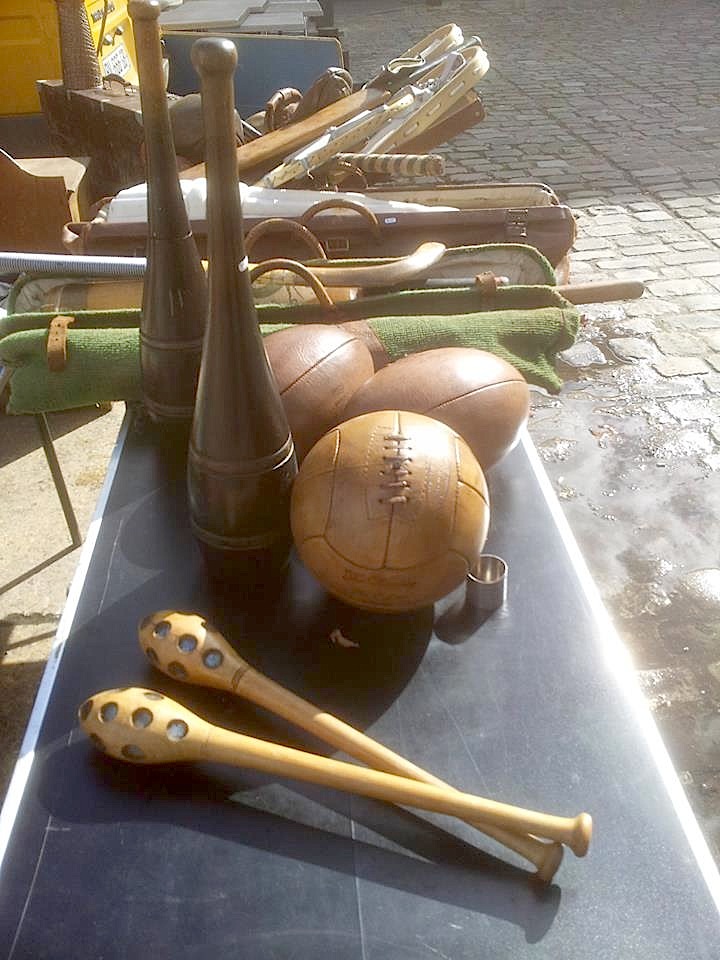 Swinging Clubs found at an Antique market. The large ones for exercise, the mirror ones for performance.

Any prop which continues to move in circles is often said to be spinning. There are many forms, such as ball, plate, fire, poi, club, flag, ring and many others. Many fire spinning techniques have been used since the 1900’s, with *Indian Style club technique which was then called swinging. Swinging was a form of exercise, and sometimes demonstrated as a performance.

People use the term Flow Arts instead of spinning, because the word spinning also refers to a style of exercise with stationary bicycles.

*Indian style clubs did not come from India, but from Persia.

A illusionary technique that the body, prop, or part of a prop appears to not move in relation to another part of the body, or prop. Isolation technique originates from mime theory, often seen with a isolated suit case. It is also used in break dance theory.

An impromptu theatrical performance that takes place on the street. It can be with musicians, jugglers, clowns or any other performance artist. Usually, a hat is offered at the end of the show to ask the passer-bys for tips in appreciation for the performance. There is a huge community of people who are buskers, often intersecting with the juggling and Flow Arts communities. The largest database of buskers in the world  can be found at The Busking Project (disclosure: I also work for The Busking Project and believe they are the coolest.)

If you have any questions or comments about these definitions please leave a comment below!